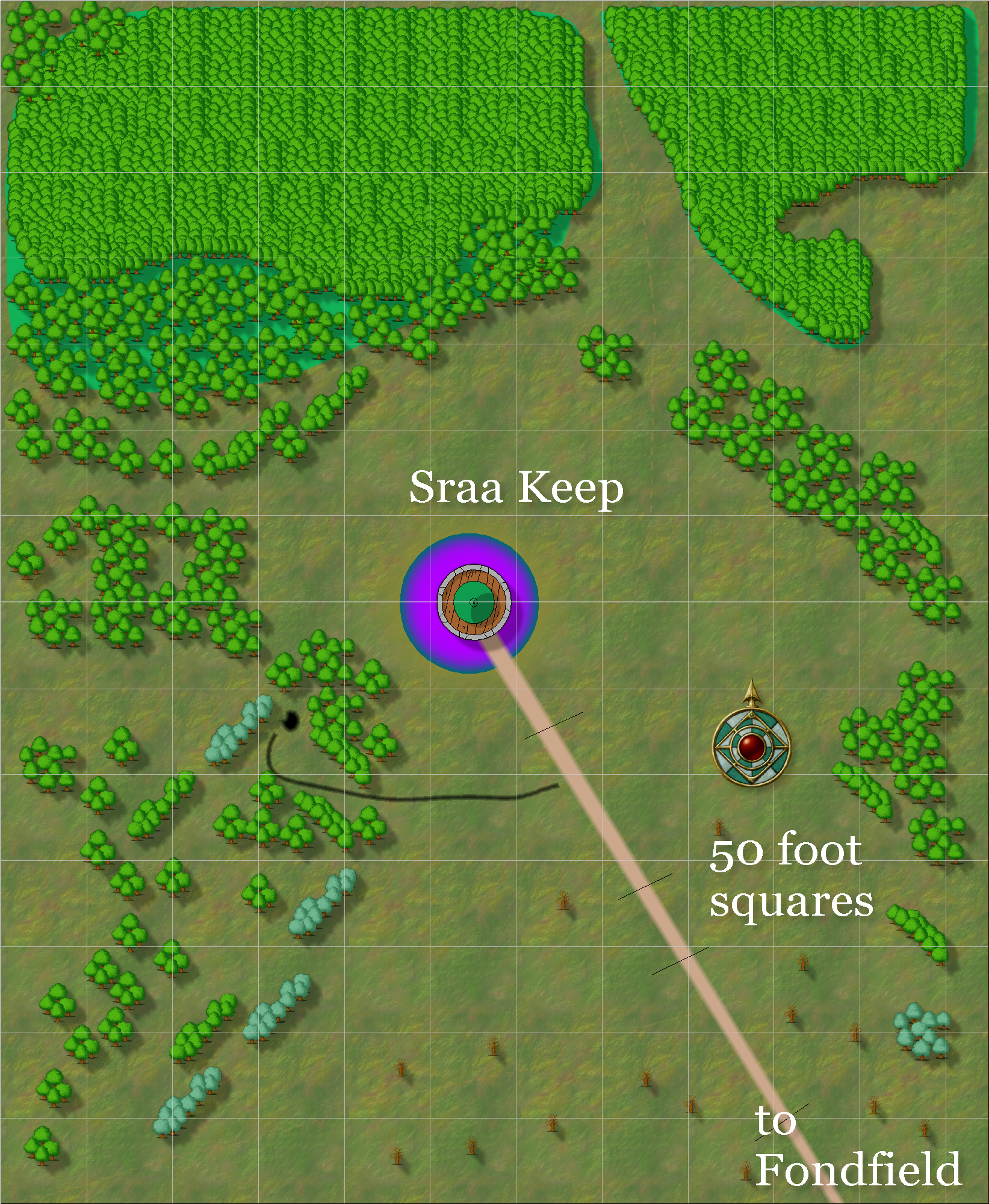 Just a short horse ride from Fondfield. Seemingly just a small ruin, with a few levels of increasing difficulty… until the magic words are spoken. A stairway, the only way out, splitting vertically and moving into the walls. A hidden passage way leading further into the ridge beneath the ruins. A feeling of Evil Afoot. The finding of a Red Dragon, chained to the floor ! And a druid exclaiming during a fight with an unknown being in the vaulted ceiling, “Nyah ! Nyah ! Couldn’t hit the broadside of a barn from the inside !” And the resulting carnage of many of the party dieing instantly … Well, lets not lop off the heads of the adventurers until its time !

Sraa Keep. Home of one, like the leaders of Quasqueton, who helped those living nearby surmount the ravages of invasion. When actually the Master of Sraa Keep only wanted to harm those Good living nearby, not allow strangers to do it.

The sheet of info given to the players.

The former owner of this keep did many good deeds, and rumors of many evil ones. When he moved into this area, he was hailed as the help that common folk of this border area needed. There had been recent incursions of Nomads from the south, and ogre and orc groups from The Great Open. Khmoj, later called Fondfield, was the home of many fewer folks then, not yet the military area commander’s fort town.

Occasionaly folks vanished from the surrounding farms. It was never really proven that Strazl Deathclaw, owner of this keep, was guilty of this. Since the disappearances happened after he arrived here, folks did become suspicious of him. Strazl moved here after the disappearance of the owners of Quasqueton. A later invasion of a Nomad horde was seemingly destroyed by Strazl and his men. Rumor has it that as they swept across this area, they demanded the surrender of Sraa Keep. A ranger had spotted them and went to the Border Guard for help. Help could not arrive quickly as the nearest castle was several days away. Several companies of heavy cavalry were sent to Strazl’s aid. He met them about 5 miles from his keep, saying he did not need their assistance. The men-at-arms left after noting the Nomads had disappeared.

In later years the area became wild and desolate. Few lived on this ridge, except for those at Sraa Keep.

Years later, it was rumored Sraa Keep had been destroyed. The only surviving witness was a shepherd who was some miles away when it happened. He had decided to take his flock to the lower slope of this ridge. His tale was not believed after statements such as ‘The entire sky lit up in and around the evil one’s keep ! The storm swirled ‘round and ‘round ! and then, then this giant hand reached down out of the clouds and snapped the keep off like it was a twig on a tree !” He became quite mad a short time later and then died in agony. Since Fondfield is just a few miles away, and any such phenomenon could easily have been seen and no mage, druid, or cleric felt such a disturbance, it most likely didn’t happen the way the shephard claims it did. The keep is destroyed, and few stones are left of it. It is doubtful anyone carted them off for building materials. This area has long been shunned. From time to time a hunter will disappear in the area of the keep. Strazl, according to tales, looked human and was rumored to be a high level magic-user, but who can tell in those long ago dark days ? Seeming is not always what a being actually might be. There are those who Watch, but in those days such were not available everywhere. From part of a report by Sherrif Bobcha Wood, some 50 years before the adventurers hear of this keep

A rumor poem they can find out in Fondfield.

Talk about obtuse ! (smile) There are several rooms it can be considered the poem is speaking about. I made it up as a non-specific poem to get my mostly new to the game players to think about what they were doing in this dungeon.

The area about Sraa Keep

As the group approaches the path, they see an area that looks like a poorly kept path. Thats the first 30 feet. The rest of the path looks like its been there for some time, and marginally maintained, but no footprints. The path is 10’ wide. The only brush or trees nearby is close to the stone head detailed below. There are a few grotesque dead trees here as well.

Touching the left-hand orange path causes 1 hp of damage and intense pain for every 6 feet of travel.

Walking along the orange path closest to the Keep, causes a loud squealing sound to sound like it is coming out of the woods. Sound occurs each one hundred feet of path walked. Any attempt to walk into the woods is almost impossible as its very thick. If they do manage to get into the trees, the orange path doesn’t go very far.

The black path goes east to a line of brush. Behind the brush is a large stone head of a caveman. Its 8’ wide, 7’ deep, and 5’ high. If a Neutral Good or Chaotic Good character touches it, they get a Limited Wish. Any other touching it will receive 1 hp of damage. In either case it disintegrates immediately. So, one hp of damage or one Limited Wish.

Rest of the area is bare earth with a greenish-brown color with large red splotches from 5-30’ across. Here and there the ground is shaped into a Nomad’s face in great agony. There are about 200 of these ‘faces’ visible from the path. The numbers increase the closer the group gets to the Keep.

The area within 150’ of the Keep is covered by a spotty mist from ground level to 6 inches thick. The maximum distance the ground can been seen through the mist is 100 feet. Patches about 10’ across shift randomly across the earth.

The Keep remnants are 5’ high. No rubble or other stones.

The moat is dry, but the group hears water sounds when they get within 75 feet of the moat.

The sounds will detect as illusion/audible glamer.

Most of this is ‘stage affects’ to get their attention that something odd is going on, but the main Bad Guy will know they are here if they do any powerful magic.

Inside the tunnels and passageways of Sraa Keep

wall sconces every 5 feet, 5 feet above the floor, few have torches in them.

There is a marginally poisonous fog on all levels. After one game-hour of exposure: SR vs. poison every 10 minutes or temporarily lose one point of Strength. Lasts until the main Bad Guy is killed while they are inside Sraa Keep or they spend one game-hour away from Sraa Keep.

Infravision 45’ on all levels.

Continual Light and Light spells cause so much glare they are useless.

Once the main bad guy is killed; the fog, the orange paths, faces in the dirt, red splotched earth, pain, low light levels, infravision restrictions, all go away as the dead are now resting easy and the Bad Guy, who is stage-managing these affects, is gone…

Certainly, somebody in the group could decide to try and dissipate the fog, but then the Bad Guy would then get upset and cause the ceiling to collapse…