A loose confederation of nomadic peoples that live on The Great Open (Alignments: N, CN, CE)

These are the Barbarian clans I created for my campaign based on info in the expansions for First Edition AD&D.

Note: Just to make sure we are using the same word, Martin is a bird, Marten is a mammal.

The Buzzard clan lives in a rocky area, very little in the way of resources. Think of them as scavengers. Note that they are not too careful to take from those who are already dead... sometimes they assist the living into death so there will be something to scavenge.

Map at the bottom of this page: maps at this scale show generalaties, not details. But the Nomad clans are mostly in the areas shown. In Teslarc; 4 areas, with 3 city-states. Land of Strife is divided by two brothers who wrestle for control of this once Lawful Good nation. One is Chaotic Evil and one is Lawful Evil.

Somewhere in this vast open area is the long fallen into ruins capital of Licieria. Yes, the circles and diamond shapes could be it. There are several of them. And maybe Licieria isn't one of the areas marked on the map.

Forests and rivers aren't marked at this scale; however, the majority of the Nomad areas are open plains.

The yellow diamond is where the clans gather for a conclave, typically every 5 years, but that isn't a hard rule. This is near the top of the map.

The full title of those lands at the top are: Place of the Dark Castle, and Kingdom of Truculence.

If the Buzzard clan is guarding anything, none have returned to tell tales of it.

A. primary ability changes and adjustments

B. secondary abilities and adjustments

a. The woodland clans; Bear, Eagle, and Star; can heal plus one hp in the woods.

b. The plains clans; Badger, Wolf, Talon; can heal plus one hp on the plains.

c. All other clans heal normally no matter where they are located.

2. Tracking ( base chance can never rise above 115 percent )

a. The woodland clans are at +5 percent to track in a forest.

b. The plains clans are at +5 percent to track on the plains.

c. The Shard clan is at +5 percent to track in rocky areas.

e. Any Barbarian, with a shaman prepared medicine bundle, can track in his or her specialty area. at +5 percent. The bundle costs 2,500 gold pieces and a one month fasting and preparation by both the Barbarian and that clan's shaman.

a. The Wolf clan has wolves for pets instead of dogs. Most villages, farms, towns, etc. wont allow wolves to enter. You might be able to locate, now and again, an area that allows your wolf in, but don't count on this happening often. A player character Barbarian can obtain a wolf from their clan after reaching sixth level. This requires a journey back to the home clan and a d20 roll versus spell every 2 weeks until a wolf decides to join your character as a traveling companion. The player character must then spend one month of game time training their new traveling companion.

b. All other clans have dogs. The NPC Talon clan has Perrigrine Falcons. All player characters must undergo the same steps to gain their dog traveling companion, as the Wolf clan does to gain their wolf.

a. Otter
b. Marten has 15 percent chance to learn

Any Barbarian can imitate sounds from their home area.

8. snares: Any Barbarian can make a snare of familiar materials.

a. known by Marten and Otter clans.

b. Badger, Eagle, Star, and Wolf clans can learn how to swim at the same chances as a non-Barbarian human.

c. Other clans are nervous during water travel and cannot learn how to swim. There is a -15 percent morale adjustment for water travel of any type.

a. The Badger, Eagle, and Talon clans dislike the Wolf clan. 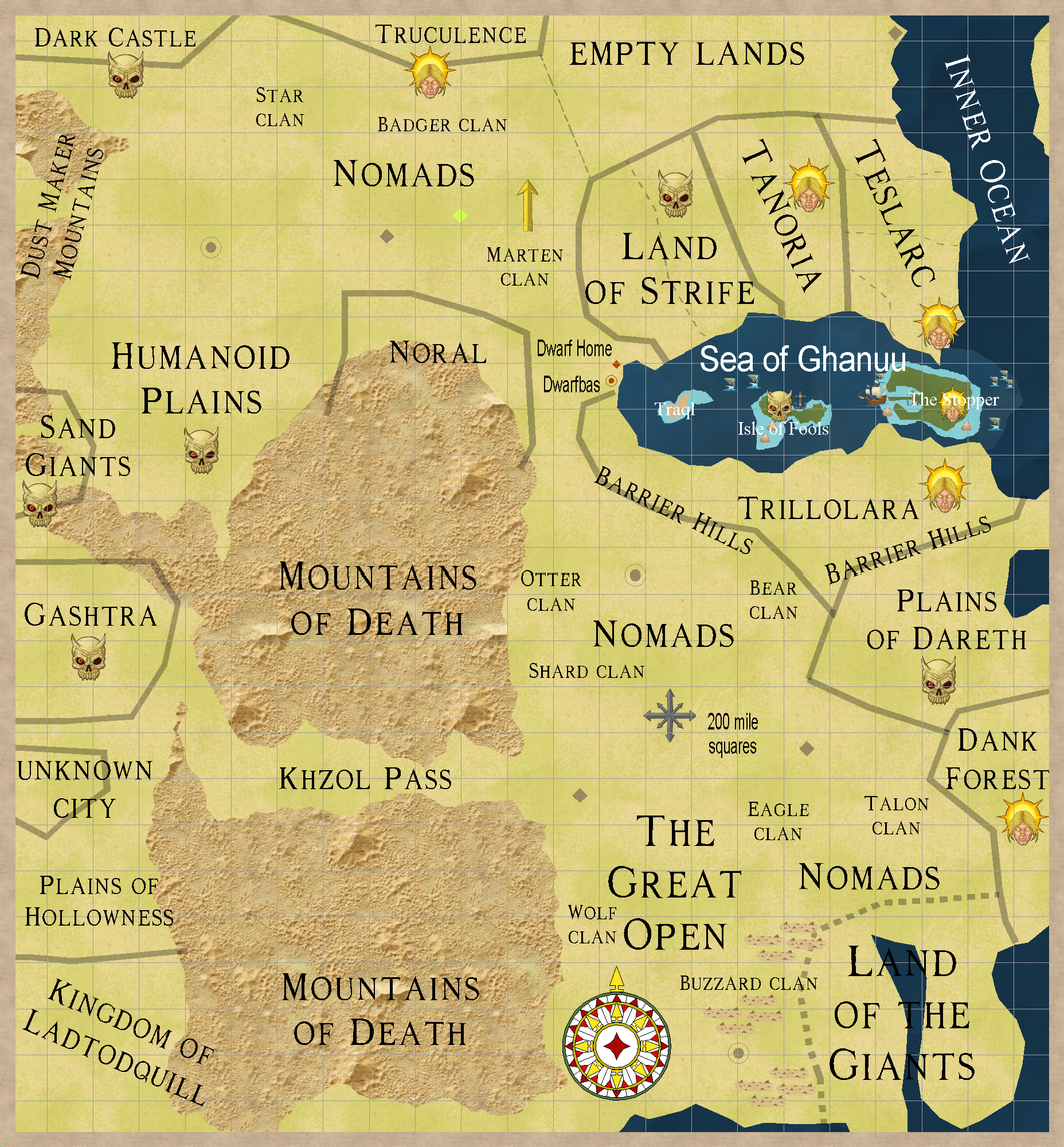