Potter is a nice little village. Pottery is what they do here, long with growing apples, wheat, and corn. Adventurers stop by from time to time to spend a bit of money. There are guards and a low-level cleric that can give some minor assistance. But they will get upset if the player characters bring back a large group of monsters in hot persuit.

But their neighbors to the west and south aren’t very friendly. They said they wanted to protect the people and town of Potter.

But they failed in that attempt. Those in Quasqueton and Khilla Keep did try for some years to be friendly and polite.

One day Khilla Keep just stopped doing anything, not buying supplies, no patrols. Word was sent to a nearby keep, who sent a small patrol. The patrol was attacked. The survivors did make it back to the nearby keep, no persuit of them took place.

The King sent a punishment force, but the keep was abandoned. Extra patrols were made from Fondfield. Not all patrols caught nor prevented evil, but it was reduced.

Many years later two men built Quasqueton. They were friendly and blocked a number of invasions. One day they sent a rider to Potter to explain they were going off on an expedition and would be gone some time, but would return eventually.

Nothing was every heard of them again. The envoy was an orc… this very much startled the Good Folk of Potter. By the time an armed patrol arrived from Fondfield the orc and the men were gone. A ranger that followed them said they had goblins and orcs in their group.

The trees in the area west of Quasqueton became sickly and bent. Few who traveled there returned.

The real evil in this forest was in The Dark. A tower run by a necromancer.

Ksh is a small fen. A magic-user levitating or flying above one side of it can see across it. Marching infantry going into it have disappeared.

It is unknown if the necromancer or the Ksh is responsible for the evil taking over places in this forest. The necromancer denies he has anything to do with it.

What is the necromancer doing ? He says he has nothing to do with the ghostly saguaro cacti growing around his tower. Swipe your hand through one, nothing happens right away. But the next day there are cactus spines in your hand.I decided to make an adventure for this location. Completely new maps done in CC3, along with new descriptions. I really don’t like blank spots in my campaign. It will be for a group of 1st-2nd level characters.

The other choices are Chell Castle and Farnal Castle which are east of Potter, but Fondfield is the best bet for major help. That includes medical as well as military.

Why not try to get help from Jolan ? They tend to fire arrows at anyone approaching. 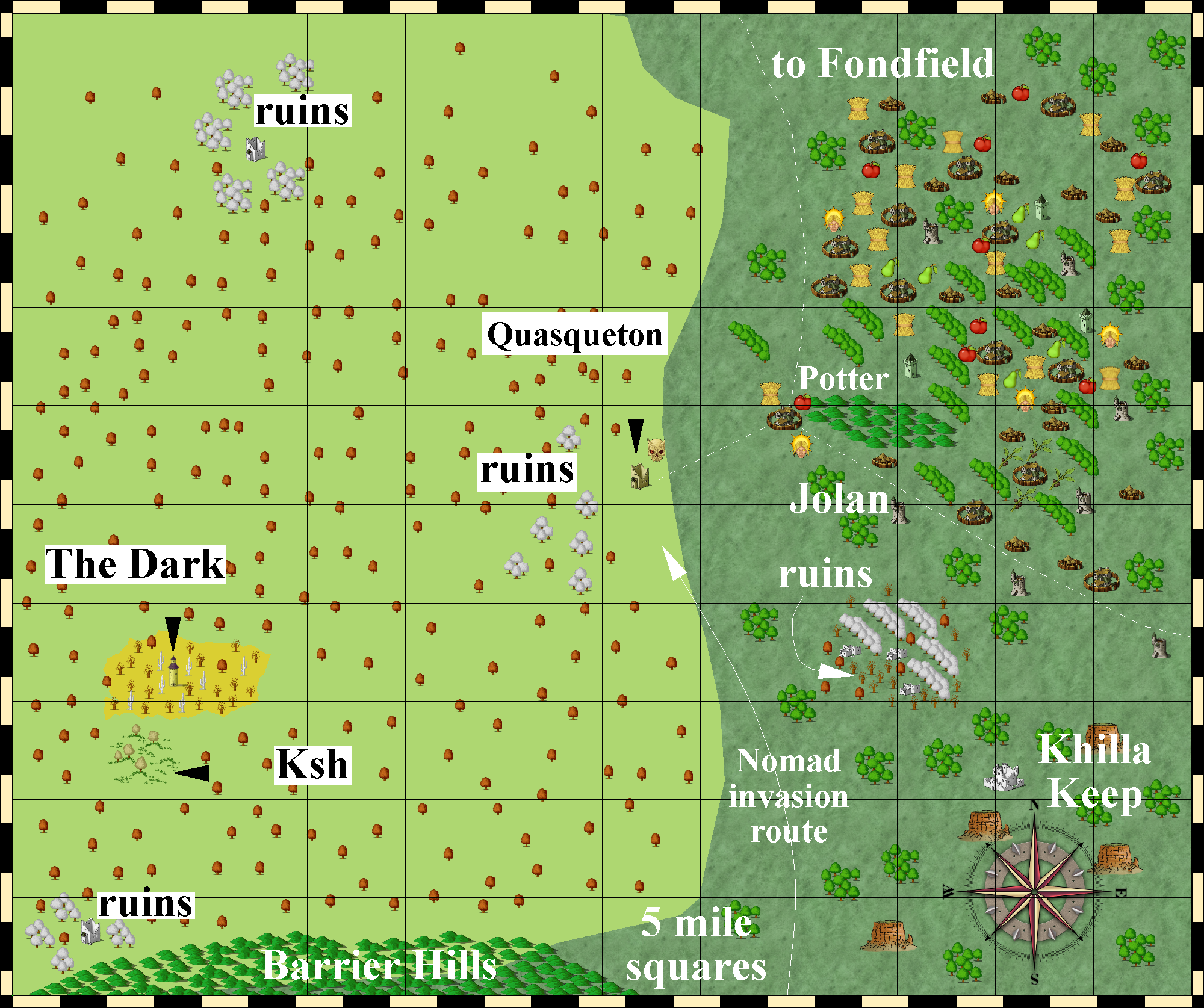